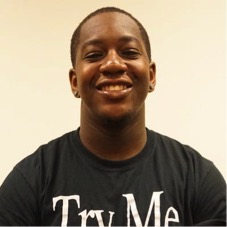 Jelani Hutchins-Belgrave is a self-described go-getter and a member of several social groups at Penn. He enjoys interacting with his computer science peers and faculty. To facilitate the ability of underrepresented students to connect with their peers, this year Jelani founded Dark Mode, a new student group for underrepresented students in computer science. He is also a regular in the Tuesday night study halls in the Computer and Information Science department. Trained in peer counseling through his Resident Assistantship in his dorm, Jelani offers computer science freshmen peer counseling, giving a seasoned student’s point of view, and helping freshmen in course selection and pacing. As Jelani put it, “I wish someone had told me what I needed to know. I want to help ease new students’ transition to Penn Engineering.”

In Penn Engineering Jelani is majoring in Networked and Social Systems Engineering (NETS). Jelani recalls his CIS 350 Software Engineering course with Professor Chris Murphy as his most memorable experience to date at Penn, mainly because he discovered through the course project that his skills lie in the area of project management. He served as a Project Manager in the course, was later promoted to Head Project Manager, and subsequently became a TA. Jelani did an internship at Uber last summer and he is looking forward to his virtual internship at Lyft this summer. He’s working to leverage his project management skills with his computer science degree to secure a tech job in project management.

Jelani offers sage advice to incoming students. “Don’t compare yourself to others, but instead find your own pace.” He also reflected back to early challenges in his introductory programming course. “There’s a bug in your code, and you don’t know how to ask for help. Experiment debugging it yourself for a while, until you know enough to form your question about what is going wrong.” Jelani also recommends students work with a friend to plan out their thought process on a white board. “You’ll find that computer science is more about solving problems than just writing code.”