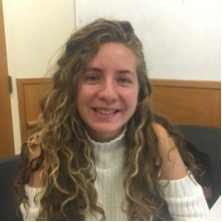 When Desiree Francesca Penaranda, known as Fran to her friends, entered Penn Engineering, she was not sure of which major to choose. She enrolled in CIS 110 Introduction to Computer Programming and really liked the course, but she doubted her ability to succeed in the major. According to Desiree, “That was my first mistake! I should never have doubted myself.” Meeting computer science student Deniz Kecik the following semester in CIS 120 Programming Languages and Techniques 1 helped change her attitude. Deniz told Desiree that if she enjoyed computer science, she should keep trying to improve her skills and reminded her of all they had learned in computing in their freshmen year. Desiree also applied to the Uncoordinated Dual Degree Program in the Wharton School and was accepted. She decided to dive in deep and follow her interests, and declared the Computer Science major in Engineering along with the Wharton major. She has never looked back.

Desiree found her passion to teach others programming in her sophomore year when she taught coding to middle school students in the Girls Who Code Program at Penn, now the Fife-Penn CS Academy. She recalls her first group of students at KIPP West Philadelphia Preparatory charter school: fifteen 6th, 7th and 8th grade girls who met in the afterschool program at 4 pm each week. Desiree and her co-instructor, Deniz, decided to adapt the curriculum to what the students were most interested. Desiree recalled, “The girls really enjoyed calling themselves ‘hackers’ and liked to see their code change the display on their screen. We decided to teach web development as the IDE was black with green font color emphasizing the ‘hacker’ feeling, and the girls could see their progress by changing font color and adding links.” The web pages gave the girls an opportunity to use coding to demonstrate their own interests, and create web pages on hip hop, the environment and even a site on making desserts. Her most gratifying moment was when a girl, who had added music to her website, began on her own to help her peers add music to theirs.

In addition to teaching middle school girls how to code, Desiree became a Teaching Assistant (TA) for CIS 110 in her junior year. She loved the challenge of working with freshmen who felt very much like she had the prior year. She made her review sessions fun and her excitement was contagious. She also acknowledged her students’ feelings when they became discouraged, and motivated them to push on. Desiree especially enjoyed creating ways to explain computer science concepts, using scarves to conceptualize linked lists, a book to explain binary search, and a deck of cards to demonstrate sorting. She was especially gratified when she saw her fellow TAs following suit in making their recitations more interactive. Desiree was so effective that CIS 110 Professor Eric Fouh designated her as the TA for Diversity in addition to her teaching responsibilities. Together they planned an agenda of inclusive teaching methods for TA training and invited guest faculty who stressed to the TAs how crucial their role was in preparing the next generation of computer scientists, and encouraged them to be roles models for novice programmers.

After graduation from Penn, Desiree plans to work in the tech industry, but first she hopes to spend six months working with Girls Who Code in Latin America. Desiree explains, “Teaching coding and technology to girls provides an amazing opportunity for social impact in poor regions of Latin America where girls can be trained for jobs that earn more in one month than their families currently earn in a year. The tech industry is constantly searching for new software developers and coders.”