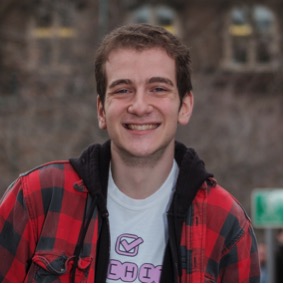 Alden Hallak has many interests, which makes him a fairly typical Penn student. He writes poetry, makes videos, studies film and acting, volunteers his time to teach Philadelphia High School students to code, and is working on an innovation to improve indoor navigation for the visually impaired. When he is not working on academic and service pursuits, Alden is a Resident Advisor for Fisher College House.

Alden chose Penn because he could major in English and add a second major in computer science. Alden’s interest in computer science goes back to programming his first game at age 8. As he developed his programming skills, he set about finding ways he could help others. At Penn, Alden directed Tech It Out Philly, a Sunday workshop program that provides Philadelphia High School students one on one mentoring to build a website through javascript and html on social issues important to the high school students.

For the past year, Alden has been consumed with developing an innovation to help visually impaired people. He first became interested in working for the disabled in his writing seminar at Penn, which focused on disability theory. In his summer internship at Google, Alden participated in Google’s Accessibility Hackathon with two students from Georgia Tech. It was through this hackathon that PERCEPT: Indoor Navigation for the Visually Impaired was born. After the hackathon, Alden’s team entered PERCEPT in the Lemelson – MIT student competition and was selected as a finalist. Alden continued to perfect his invention, working with Professor James Weimer, whose research focuses on medical and embedded cyber-physical systems, and PERCEPT made it to the semi-finalist round for Penn President Amy Guttmann’s Innovation Prize.

Through participating in a variety of activities, Alden met faculty and peers who helped him to develop his skills and confidence to pursue his interests. In reflecting back to his freshman year at Penn, Alden said, “I was overwhelmed at first and afraid I would not find my niche at Penn. Freshmen should not get discouraged, but try out as many clubs and meet as many people as they can.”